The KONGRES Magazine team headed to Bratislava, Slovakia, at the beginning of November to inspect the city’s automotive industry. We must admit, we couldn’t hide the surprise on our faces when we learned that Slovakia has been the world’s largest producer of cars per capita (as an example – 1,040,000 cars were produced in the year of 2016 alone, for a country of a 5 million population.)

Slovakia is attracting more and more car manufacturers due to national initiatives, low working and living costs, and its favorable logistical location. The country’s powerful car production represents 44% of its entire industry and Slovakia now has the world’s highest car production per capita. In addition to Kia, Slovakia has also managed to attract Volkswagen, Peugeot, and Citroen, and has recently celebrated the start of construction of a new Jaguar and Land Rover factory in Nitra, which won the investment against competition from Poland, Hungary, and Mexico. Alongside car manufacturers, Bratislava is also known for its innovation, thanks to the suppliers of optoelectronic, robotic and software sector. The automotive sector also generates a lot of events and is helping Bratislava become more interesting for car launches.

At Volkswagen Slovakia, we got to meet spokesperson Mgr. Lucia Kovarovič Makayová and discuss the impact of the automotive industry on the everyday life of Bratislava inhabitants. As she said, “Slovakia is an automobile superpower. We produce more cars per capita than any other country in the world. Made in Bratislava constitutes the largest share. The Bratislava plant is the pride of the entire concern. We are the only plant in the world to produce 5 car brands under one roof; around 400,000 vehicles leave Bratislava each year. Volkswagen Slovakia is the largest company, investor and exporter in Slovakia; it is the driver of the Slovak economy and passes its share of success further. As a partner in the region, we are aware of our social responsibilities which we transfer to the people of our region.”

As they say in Volkswagen, they ‘live and breathe Industrie 4.0’ and for the customers’ requirements have also deployed and are using the most modern and innovative technology, which is constantly developing. To date, about two thousand robots have been installed in their production halls, while online monitoring of production and automatic self-driven vehicles are part of their everyday working life. 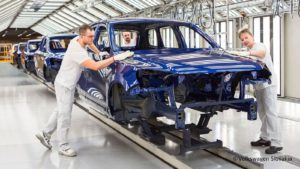 As for their love for locals and visitors for Bratislava, this year the company also brought the unique project up! city to the centre of Bratislava, so visitors to the city and locals can rent the eponymous electric car right in the heart of the centre of the city. If one has a great desire to be an even deeper part of this automotive business, conference facilities can be booked at the Volkswagen factory. The central event space is called Auto Forum Congress Centre, a flexible space of 680m2 that can accommodate up to 200 participants. As befits a car factory, it is technically equipped to a superior standard and offers the same sense of quality than you would expect from such a prestige car factory. An integral part of the experience is the exhibition with the presentation of the latest technologies. The factory’s latest acquisition is the Pulse conference venue, a modern and minimalistic-design building that includes two conference rooms and can accommodate up to 150 participants. The venue is also equipped with a 581m2 multifunctional space.

The ring is host to professional motor sports and provides clients with a unique opportunity to perfect their own driving skills, try out high-speed driving, test driving techniques and experience the joy and freedom that can only be found ‘behind the wheel’. 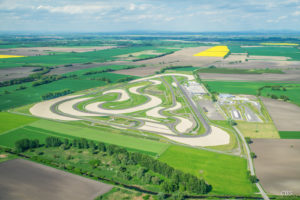 To our surprise, the racetrack’s length makes it one of the longest road tracks in Europe, at 5.9km and with 7 left and 7 right-hand turns, as well as 4 artificial climbs.

Another benefit of the Slovakia Ring is the list of opportunities for various kinds of cooperation. For instance, one can rent the premises and equipment at the venue for various events, including for corporate ones. For incentive ideas, they offer the off-road facility, which makes a perfect polygon for testing the limits of off-road vehicles. They also offer more than 21 training modules that are suitable for testing every vehicle and driver to their absolute limit, ensuring the adrenaline rushes through their veins.

Did you know that the MATADOR brand has also found its home in Bratislava? The company was established back in the year 1905, focusing on products made from rubber, while its true success story began after the year 1950 when the tire production plant in Púchov was built. The key milestone for the company happened in the year 2007, when the rubber division of the business was divested to the joint-venture partner Continental AG – but they then decided to write a new chapter, or to say, a new ‘book’ of a success story, with the transformation from a leading tyre producer to the first class TIER 1 supplier. It is no surprise, then, that they have managed to become the largest family-owned Slovak TIER 1 supplier, a well-established CEE automotive supplier located in three countries around Europe. 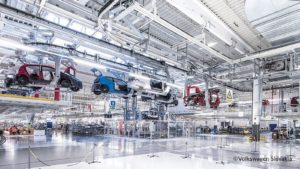 We could list out the companies linked to the automotive industry and production of custom-made cars that have found their home in Bratislava, but for that, we would need the entire magazine dedicated only to this innovative city! Bratislava is truly the city of innovation, engineering, start-ups and home to people with great dreams, high hopes and even greater stories of success. You might just want to see it for yourself – visit Bratislava, where the automotive industry truly is a part of everyday life. Come and acquaint yourself with this metropolis of the automobile industry in the heart of Europe.

In writing about the automotive industry, we wanted to just warm you up a little bit more. The Bratislava Convention Bureau is in process of preparing a great campaign on this attractive industry with a scent of gasoline – that one could have serious difficulties escaping your temptation. Stay tuned, follow the news on the www.bratislava-motor-city.com (coming soon..) and join us at the great car adventure in Bratislava in the beginning of 2018!